Here are some parts I made for another arcade game related project:

I believe this project involves adding an arcade style joystick and buttons to a PS3. These are 2 sets of parts. Some of these parts required a groove in their edge to accept a plastic “T” molding. The following picture shows a part before grooving on the left, a part after grooving on the right, and the special vacuum fixture in the middle. The vacuum pulls any warpage out of the parts, making sure the slot is perfectly centered all the way around.

On Monday he filled out my contact form and we exchanged some emails discussing details, Monday evening he stopped by with the material (5/8″ MDO plywood), and now (Thursday afternoon) he has precision cut parts ready to assemble. How cool is that?

Here’s a job I did recently for someone building their own arcade style game unit. He had a cute little USB driven display that he wanted to use for stuff like game selection and to reset the main unit in case the software developed indigestion from an improperly handled exception or an interrupt gone wrong. This was the end result:

Here’s a pic of one of the standoffs I made to attach the mounting ears of the display to the front plate: 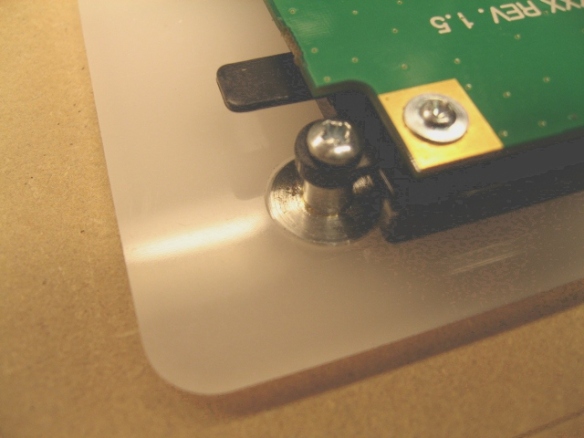 The gray stuff it’s embedded in is some scrap acrylic I used for a test cut. The next picture shows the back of the aluminum plate.

Since the standoffs were to be epoxied to the plate I made the base big for extra glue contact. I also made him a router template that he used to precisely cut the plywood parts. He sent me DXF’s output from Adobe Illustrator, which seems to be a favorite among game modders.

Interesting little parts made from HDPE. I probably shouldn’t tell what they’re for yet. This started out as a DXF file from an ancient version of Adobe Illustrator which was emailed and imported just fine.

A quick wave of the heat gets rid of a lot of the scuffing and scratching on the original surface of the sheet, much like flame polishing acrylic. The rounded over edges are easily done on the CNC router. 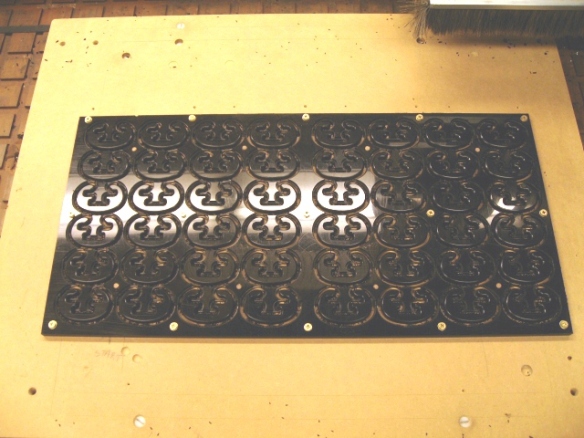 Prototype foam parts. About 5 inches deep at the lowest point. Coffee cup shows scale. This is a test cut made in cheap one-pound foam from the lumberyard. The yellow lines are where the two-inch sheets were glued up with urethane foam.

Here it is flipped over after cutting the bottom side.

And here is the finished part, cut free from the frame.

If you think this looks like just another useless desk, toy, you are sooo wrong! It’s actually a sample to demonstrate  my plastic cutting capabilities. I was perusing Thingiverse looking for inspiration, and found this version, which at number 1082 appears to be a pretty early thing.

I liked the Reuleaux triangle because it incorporates some interesting geometrical concepts. Here’s a diagram to illustrate: 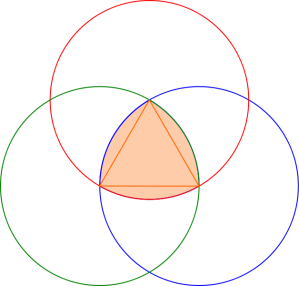 It just so happens that this shape rolls around nicely inside an appropriately sized square, as the following animated gif illustrates:

It’s a  principle which has actually been utilized to drill square holes. Click here to see the Wikipedia entry. Reuleaux, in spite of his French-sounding name, was actually a German engineer who did pioneering work in kinematics.

Here’s one last macro shot of my sample, showing the chamfer cut on the recesses where the nuts fit:

The nuts which fit in these recesses are 10-24 thread size, and are 3/8 of an inch across. Those toolmarks on the bottom are from an eighth inch diameter bit.

The plan is to put promotional engraving on these, check back for examples!

Lasers work well for cutting plastics- they’re fast and accurate, and leave a nice shiny edge, which is usually a good thing. There are however some drawbacks. Those nice looking shiny edges can develop cracks when glued, because they have stress “baked in” by the laser.

And you also can’t  add 3D features like this nut pocket:

With a router you can also add bevels to the edges of a part like this:

The part  in the picture above is made from extruded acrylic. It doesn’t machine quite as nicely as the cast acrylic in the first two pictures, but with good sharp tools and appropriate cutting strategies it can be cut quite well.

If you have parts that were already cut on a laser and need some additional features added to  them I can definitely help.

My friend John Scherer is an active member of local hackerspace TCMaker and he is building a super sturdy small CNC router on a shoestring budget. They don’t have a milling machine there, so I helped him out. 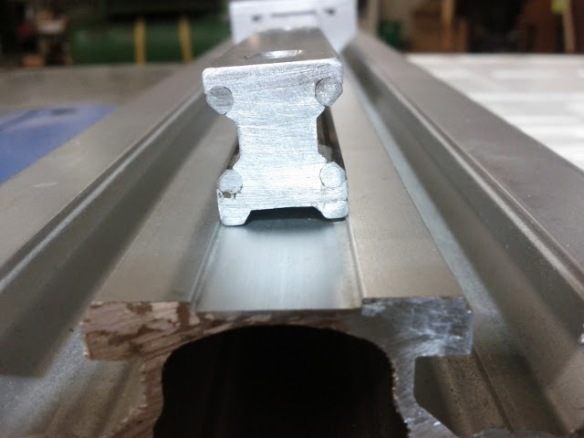 The rails themselves are aluminum extrusions with what looks like 4 steel rods embedded where the ball bearings contact the rail. Very clever.

The plan was to mount them to the 80/20 style extrusions, but as can be seen from the photo above, the channel  neede to be widened a bit for the extrusion to sit flat. Holes needed to be drilled through the 80/20 for mounting screws, and steel backing plates made, since the 80/20 is thin in the center.

Here’s the 80/20 being drilled on the trusty Bridgeport: 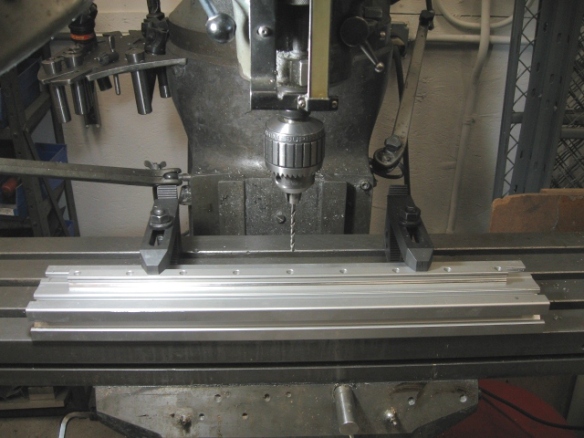 This photo shows the individual parts in front, and an assembled unit behind it:

This view from the end shows the steel backing plate installed: 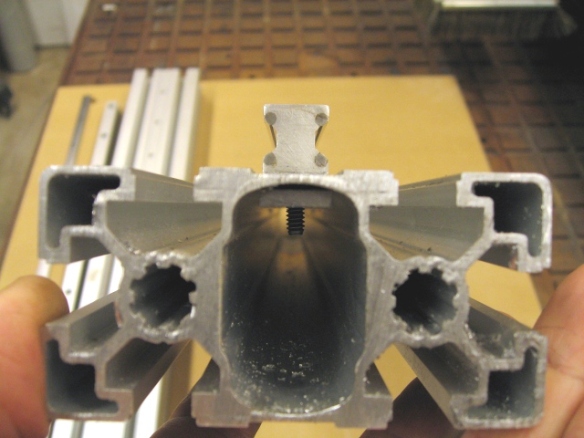 One very frustrating situation for a woodworker is having an otherwise nice board which has acquired a bit of a twist along it’s length. Feeding it through a planer won’t get it out. Even if you have a jointer wide enough, it still takes quite a bit of skill and time to remove the twist.

The CNC router makes short work of it.  I enhanced this image a bit to make it easier to see the gap under the closest corner of the board. This was before the board was surfaced, the thickness is pretty uniform.

Here is a picture of the other end after surfacing. The top surface is now flat, the difference in thickness from left to right shows how twisted it was. I then flipped it over and cut it to uniform thickness. If you had a pile of twisted boards to flatten out, you might just flatten one side on the CNC router, and then feed them through a planer. Actually any piece of wood that would fit on the four foot square table and under the 6 inch gantry could be easily made flat as a pool table. This could include a big slab of a tree or a butcher block.

And last (but not least) is the cutter which makes it possible. The carbide tips (inserts) which do the actual cutting are only about 2 bucks each and have 4 usable cutting edges.

Here’s an example of the kind of 3D carvings which can be done on my CNC router:

This 3D object began life as a 2D drawing:

A bit of digital massaging transformed the 2D drawing above into a machinable 3D object. I used 2 pieces of totally free cross platform software, GIMP, and Blender3D to create the 3D object, to demonstrate that you don’t need software costing thousands of dollars to create something I can cut for you.

When it comes to creating the “G-code” that tells the machine exactly what to do and where, there isn’t really any good free software yet, so I use commercial software called  MeshCAM. In the picture below you can see the object loaded in MeshCAM, and ready to codes for the machine. It’s called an “STL” file, and it’s made up entirely of tiny triangles. Bazillions of them. The blue line in the center lets you know which way is up. 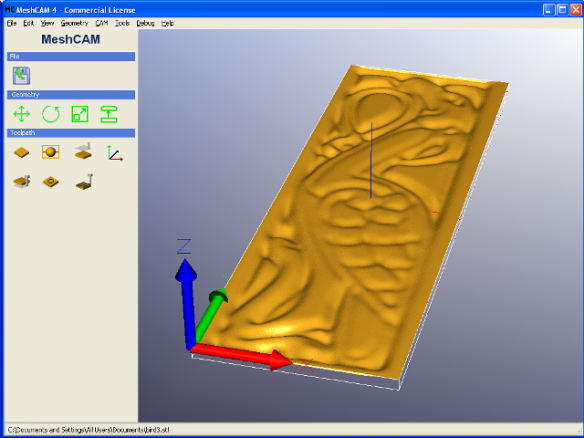 All those fine green lines show where the tip of the tool is going to go. This is called a “toolpath”. Typically a job like this will have at least two toolpaths, a “rough” cut and a “finish” cut. The close distance between the lines in the image above shows this is a finishing toolpath. The closer the lines, the finer the finish, and the more time it takes to complete. 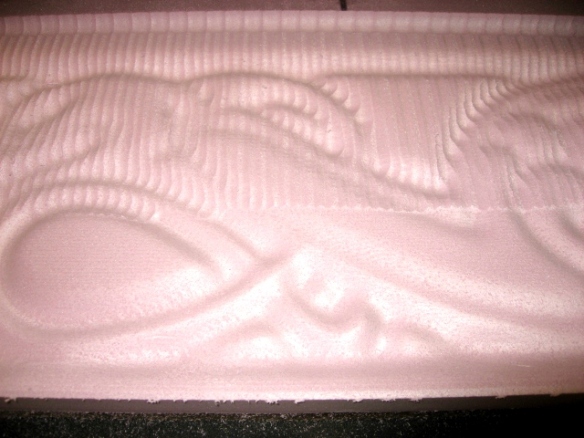 The program was test cut first in insulation foam, since it’s cheap, easy on cutters, and cuts quickly. The finishing toolpath has smoothed out the area in the bottom half of the photo, while the ridges from the roughing toolpath are still visible in the top half.

This is a test stencil I made for a my friend Sean Doyle, who was providing Halloween decorations for downtown Minneapolis nightclub The Lounge.

And here is the test print I made using my airbrush. 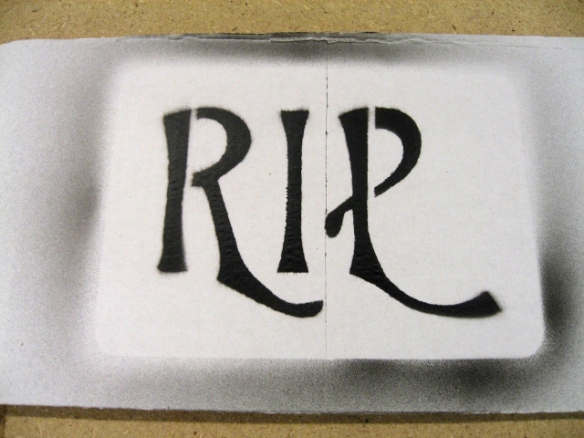 Did I mention that I’m not a stencilist? Still this was enough to show my ability to cut sharp corners.  Here’s one of the actual stencils:

These were used to make styrofoam tombstones by spraying solvent-based paint through them and onto the foam, which then etched in the letters. A little work with a torch and some sprayed acrylic paint completed the spooky look, alas I have no pictures of the finished product. The material was dirt cheap 1/8″ hardboard, reinforced with a little epoxy (that’s the dark areas in the picture above) which made those delicate little threads holding the centers of the “o”‘s, etc. tuff as nails. Well, at least as tough as epoxy nails.